The Minister of Defence, Maj.-Gen. Bashir Magashi (Rtd), has assured troops of the Joint Task Force North East Operation Hadin Kai (OPHK), of government’s commitment to supply them with more equipment and logistics for operational efficiency.

The Director, Army Public Relations, Brig.-Gen. Onyema Nwachukwu, in a statement on Saturday, disclosed that Magashi gave the assurance at the operational and assessment visit to the Headquarters Theatre Command in Maiduguri, on Friday.

The Minister said that President Muhammadu Buhari had continued to provide the requisite logistics support to prosecute the war against insurgency in the North East.

“We are fully committed to providing all the necessary resources, to enable you do your job professionally to the best of your ability. We have all seen your commitment and we are proud of you”, Magashi said.

He expressed optimism that success was near, saying that insurgency would be brought to an end with sustained determination and commitment, while commending the overall performance of the Nigerian military in the counter-insurgency operations in the North East.

He disclosed that the visit to the theatre was to jointly assess ongoing operations and facilitate the progress of other operations across the country for security, peace and development.

The Minister also inaugurated a set of twin buildings, newly constructed as transit accommodation for officers of the headquarters of OPHK. 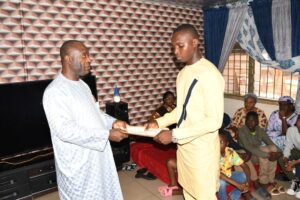 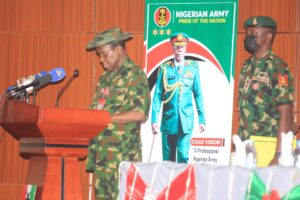