The Minister of Defence Maj Gen Bashir Salihi Magashi (rtd) has put machineries in motion to carefully contextualise and conceptualise the draft  documents for the proposed Memorandum of Understanding, MoU between the Federal Republic of Nigeria and the Republic of Bulgaria.

This was sequel to the courtesy visit to the Ministry of Defence Headquarters Abuja by the Bulgarian ambassador extraordinary and plenipotentiary to Nigeria, Yanko V. Yordanov.

General Magashi who pointed out that the bilateral relation between Nigeria and Bulgaria Spanning over five decades is long enough to snowball into a stronger Defence Cooperation especially now that the country is confronting internal security threats being orchestrated by non – state actors.

He said although the time is ripe for the two Countries to emplace a workably robust MoU, there is however the need to fulfil all righteousness diplomatically to cross the Ts and dott the Is in the legal document.

The Defence Minister who disclosed that the proposal is being transmitted to the Ministry of justice for perusal assured Bulgarian Ambassador that the technical inputs of the Permanent Secretary Musa Istifanus is equally germane to the final draft of the MoU and pointed out that  the director of the Joint Services Department Olu Mustapha will also do the needful expeditiously.

He therefore told his guest that the processes and procedures the documents are being subjected to are the required due dilligence  paths that will bring out the best in safeguarding  interests of the two cooperating nations.

On his part, the Bulgarian Ambassador, Yanko V. Yordanov thanked the Defence Minister for the bilateral talk which he said will culminate into the long overdue significant signing of the Memorandum of Understanding that will  deepen the existing exchange of Military trainings and explore other critical areas of Defence cooperations between the two Countries.

He seized the opportunity of the courtesy visit to invite the Minister of Defence as Special guest to the forthcoming Military exhibitions coming up in Bulgaria by June next year.

He said lots of opportunities await both countries if the Nigerian Armed Forces participate in the invitational event that promises to showcase an aray of new Military technologies and harvest of modern weaponry developed by the Bulgarian Armed forces.

Meanwhile the Minister has granted audience to the  representatives of the Widows of the Officers who died in Hercules C -130 plane crash in 1992 led by the National co-ordinator Ogale Jude.

They raised the general concerns about the yet to be fulfilled promises by the tripartite bodies of the Federal Government,  the Home states of the deceased and the Services in the areas of building houses, purchase of cars and trainings of the Children of the  families of the officers  who paid the supreme price in the  inline of duty to the country.

General Magashi  expressed strong political will to address the gaps that led to the delay and discrepancies in settling the commitments to the Widows who sadly disclosed that they have lost some of their members to the cold hands of death for lack of funds to pick and pay their medical bills.

The minister tasked the group to furnish the Ministry with the updated facts and figures about members  living or dead adding that the raw data will trigger actionable efforts to meet their demands once and final. 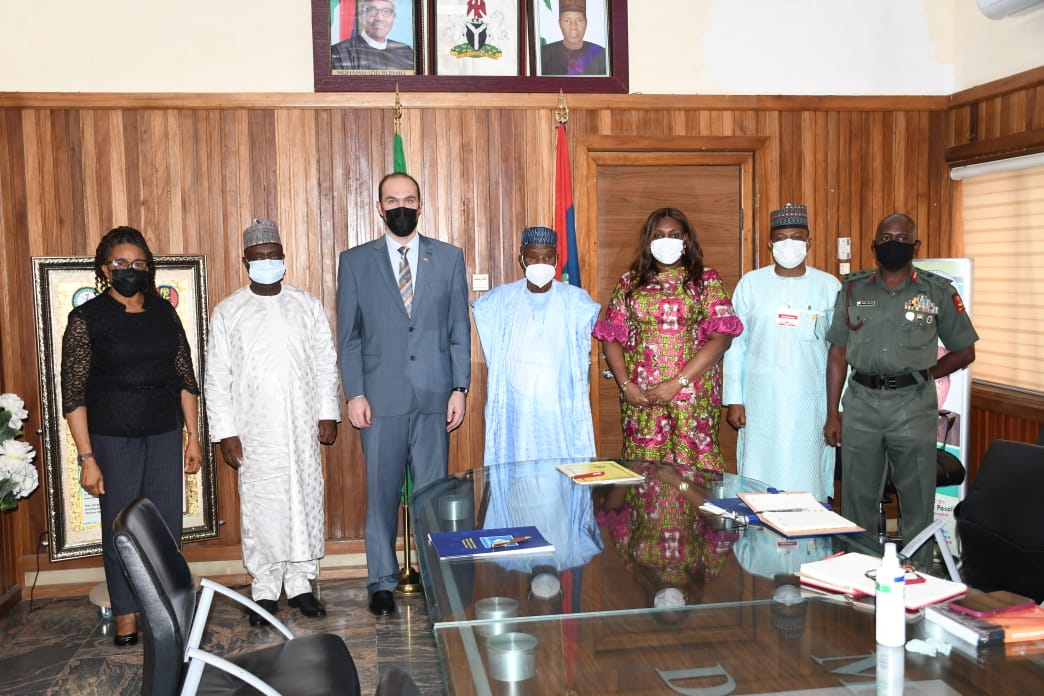