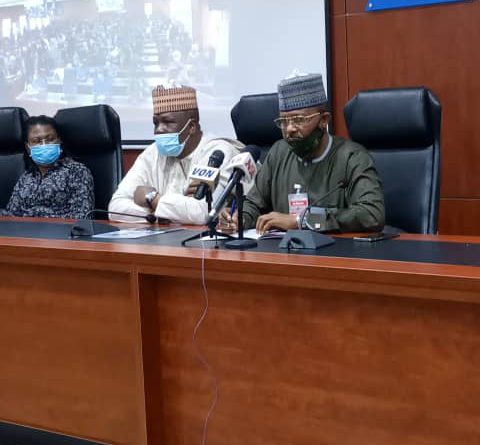 The Minister of Defence, Maj Gen Bashir Salihi Magashi (Rtd) has assured Military Widows of continous support in the tasks of making life worth living for their families.

The Minister noted that the concerns shown by the ministry is a measure of love and respect the present administration of the Commander-in-Chief of the Nigerian Armed Forces, President Muhammadu Buhari has for the fallen  heroes and the bread winners of their families who laid down their lives in service to the country.

The Minister of Defence  who was the Special Guest of Honour at the occasion and represented by his  Special Adviser Technical, Major General Ahmed Tijani Jibrin (Rtd)lauded the initiatives of the leadership of the Association for creating a platform for members  to speak with one voice on matters bordering on their welfare and the training of their children.

While assuring the widows of the support of the Ministry of Defence at all times, he encouraged the Chief of Defence Staff, the Service Chiefs, Heads of Defence Institutions and  well meaning Nigerians to support the building of the Secretariat.

He said when completed the Secretariat will serve as baston of  empowerment  for acquisition of Skills for the Sojas wives and the less privileged. Going forward the Minister advised the Leadership of the Military Widows Association to maintain probity and accountabity in the management of the funds raised for the proposed project and to shun wasteful expenditures in all their endeavours.

The ceremony  which featured presentation of drama depicting agony of loss of bread winners in the affected  families was attended by the representatives of the Ministers of FCT, Interior and Police Affairs as well as Service Chiefs.

Special Assistant, Media and Publicity to the Minister of Defence.