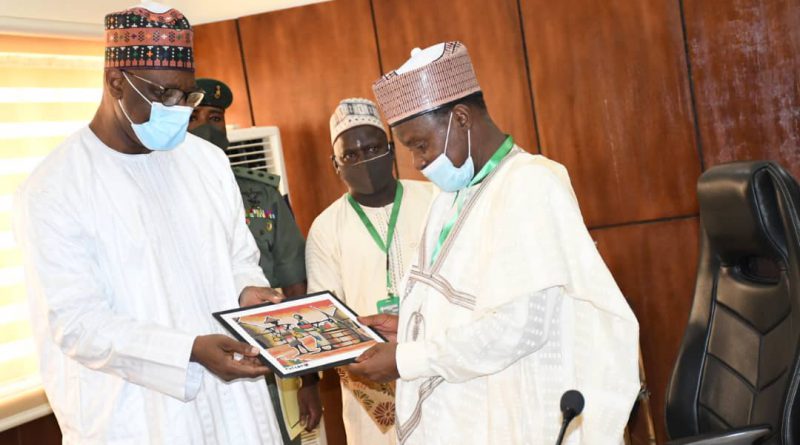 
The Minister of Defence Major General Bashir Salihi Magashi(Rtd) has assured his Republic of Gambian Counterpart, Ambassador Omar Faye of the ratification of the new Memorandum of Understanding (MoU) between the two Countries very soon for enhanced bilateral Cooperation.
The MoU according to the Nigerian Minister of Defence is aimed at strengthening decades of already existinng Military bilateral Cooperation in areas such as joint Training, Technical assistance and intelligence sharing to consolidate on the existing relation dating back to 1965 when Gambia got her independence.
General Magashi

put article two of the MoU in perspective to include Training of Senior and junior Officers of the Gambian Armed Forces in Nigeria. He said the Commander-in-Chief of the Nigerian Armed Forces, President Muhammadu Buhari is passionate about deepening bilateral relation with Gambia as a friendly Sister Country .
The Gambian Minister of Defence Ambassador Omar Faye said the courtesy call of the 6-man delegation which include the Minister of Foreign Affairs Dr. Mamdou Tangara as approved by the Gambian President Adama Baro was a follow-up to the earlier agreement and arrangement made during the 44th Ordinary Meeting of the ECOWAS Mediation and Security Council in Niamey.

Gambian Defence Minister who was part of the Gambian Contigents to ECOMOG in Liberia where the Nigerian Minister of Defence , General Magashi also served as Brigade Commander 15 ECOMOG, appreciativelly placed on record what he called the Big Brother role of Nigeria in establishing the nucleus of the Gambian Armed Forces under the Late Nigerian General Abubakar Gada who he said the Gambian Government is planning to immorterlise him posthumously by naming a national monument after him.
He added that Nigeria’s strategic supports remain the lifelines for the sustenance of Gambian Democracy, Military and Judicial system.
On his part, the Gambian Minister of Foreign Affairs Dr. Mamadou Tangara conveyed the appreciation of the President of the Republic of Gambia Adama Baro to President Muhammadu Buhari for his assistance to his Country especially during the political impasse in 2017.
He felicitated with Nigeria’s 60th independent Anniversary and sought further support from Nigeria ahead of the 2021 election in Gambia.
The Gambian High Commissioner to Nigeria Amodou Jaal and the Defence Attache to Nigeria Commodore Assan Sarr were parts of the 6-man Contigent on the Courtesy call on the Nigerian Minister of Defence.
While the Permanent Secretary Ministry of Defence Babangida Hussain, the Director Joint Services Department, Ministry of Defence Mrs Olu Mustapha, the Defence Liason Officer Ministry of Foreign Affairs, Brigadier General Rabe Abubakar and the Director West Africa Affairs, Ministry of Foreign Affairs Mohammed Danjuma were part of the programme.
SIGNED.

SPECIAL ASSISTANT MEDIA AND PUBLICITY TO THE MINISTER OF DEFENCE.