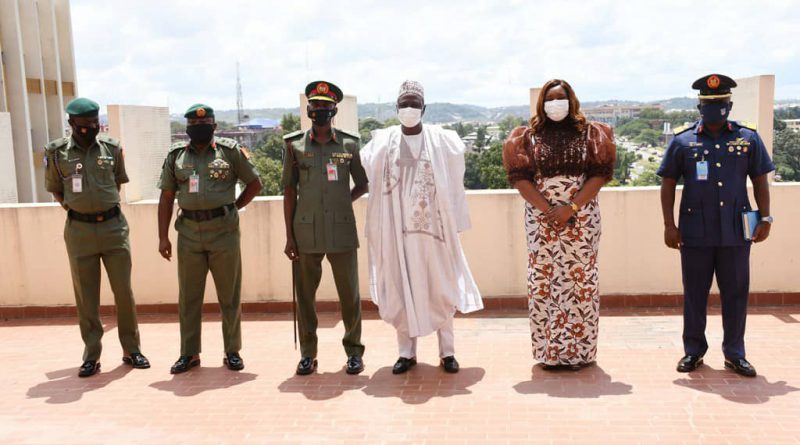 The Minister of Defence, Maj. Gen Bashir Salihi Magashi has said that the Federal Government will continue to place high premium on the welfare and wellbeing of Nigeria’s fallen heroes, veterans and their spouses.
General Magashi said it is necessary for the Federal Government to appreciate the efforts and gallantry exhibited by the living and fallen heroes in the discharge of their National assignment of safeguarding the integrity of Nigeria.
The Minister who was represented by the Permanent Secretary, Alhaji Babangida Hussaini, said this while inaugurating the 2021 National Planning Committee on Armed Forces Remembrance Day Celebration AFRDC in the Ministry of Defence, Abuja. In his words, “As you may be aware, the AFRDC is organized by the Ministry of Defence on behalf of the Federal Government in honour of the Fallen Heroes who laid down their lives in service to humanity during the first and second world wars, the Nigerian Civil War, Peace Support and Internal Security Operations. The event is also used to honour the living veterans and raise funds to support the families of the fallen heroes”.
Maj Gen Magashi noted that Nigeria has been engulfed in various internal crisis such as; the war against terrorism, Banditry, Cattle Rustling, Herdsmen/Farmers clashes and separatists agitation which sometimes turn violent, adding that these security challenges have tasked the capabilities and resources of our Armed Forces.
He affirmed that it is fitting that the nation remembers and appreciates these sacrifices and raise the consciousness of our citizens to the worthy cause of supporting those who chose to make them.
Responding on behalf of the members of the National Planning Committee, Director, Joint Services Department and chairman of the committee, Mrs. Olu Mustapha, said that, the Armed Forces Remembrance Day celebration seen by many as the laying of wreath at the National Arcade, comprises of a series of activities spanning a period of time commencing from now and climaxing with the ceremonial parade and wreath laying on the 15th January, 2021.
Mrs. Mustapha said the celebration would involve eminent Nigerians, members of the Diplomatic Community and the celebrants.