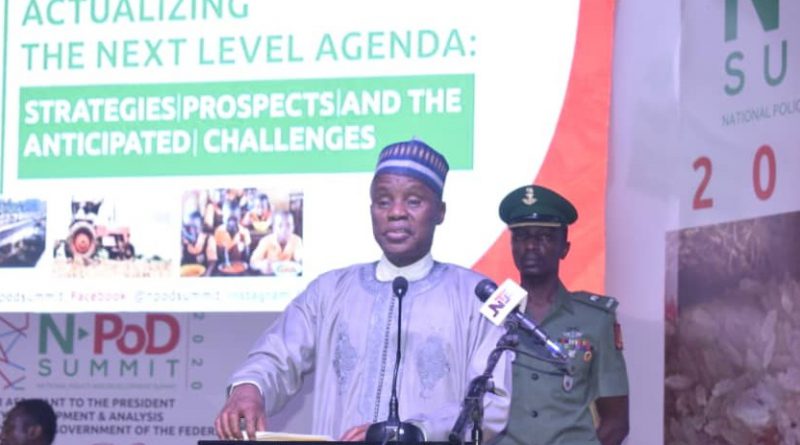 As part of efforts to actualize the next level agenda of the present administration, the Office of the Special Adviser to the President on Policy Development and Analysis, has organized the 2020 National Policy and Development Summit in Abuja. It was geared towards identifying factors that  delay the actualization of the agenda and secure the nation for socio-economic development.

The Summit themed Actualizing The Next Level Agenda recorded critical deliberations and discussions on the strategies, prospects, and challenges encountered in realizing   the  socio-economic development of the nation.

In his lecture tagged, securing the nation for socio- economic development, the Minister of Defence retired Major General Bashir Magashi said there would be no peace without development and no development without peace.

He further explained how kidnapping, terrorism in the North-East, crisis in the North-West, pipeline vandalism and crude oil theft have affected economic activities and have made it difficult for states and the Federal Government to attract long-term foreign direct investments into the country.

Some of the distinguished speakers  at the summit include representative of Hon. Minister of Transport, Rt. Honorable  Rotimi Amaechi and The Executive Chairman of FIRS, Alh. Abdullahi Jami.

Others include an Adjunct Professor at the National Defence College, Abuja, Professor Olajide Oladipo, Professor of Economics, National Institute for Legislative and Democratic Studies, Prof. Nazifi Abdullahi Dama, amongst others.

The National Policy and Develoment Summit is expected to reviewed the change agenda and highlight the successes recorded, challenges and lessons learnt in the past five years of the President Muhammadu Buhari’s administration, as well as issues of infrastructural decay.