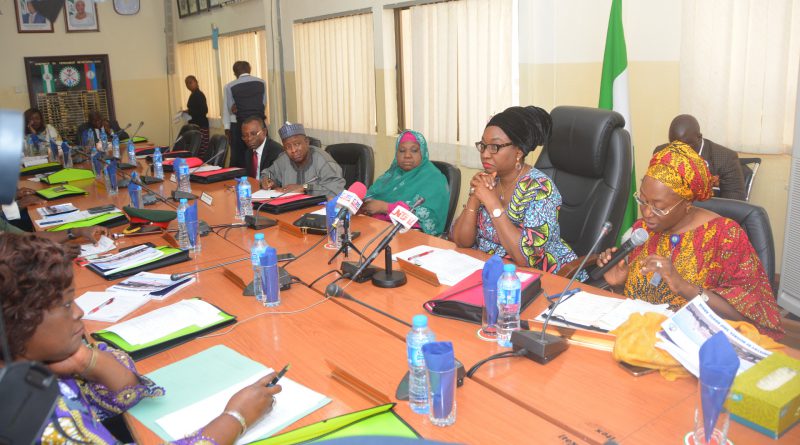 The re-introduction of Peer review Mechanism among Permanent Secretaries by Head of Civil Service of the Federation has no doubt provided the body of Permanent Secretaries the unique opportunity to effectively evaluate each Ministries Department and Agencies (MDAs) successes and challenges as well as keeping them perpetually abreast of their responsibilities.

The Hon. Minister, Mansur Dan-Ali made these remarks while receiving in the audience the team of Permanent Secretaries from different ministries led by the Head of Civil Service of the Federation, Mrs Oyo Ita in his office, Abuja.

Addressing the team, the Minister stated that Ministry of Defence is a peculiar ministry, with Civilian and Military components. Both components he said, work together to maintain peace and harmonious working relationship, stressing that the modest achievement recorded wouldn’t have been possible without such cooperation.

Speaking further, the Minister commended he visit of the head of Civil service of the Federation and her team to the Minister, saying; “the assignment which you are embarking on is an upfront of what the Ministry of defence has so far been doing to maintain a unique mandate of providing policy and administrative support to the Nigerian Armed Forces, President Muhammadu Buhari in supporting the Military in the discharge of their responsibilities with ease.

Speaking earlier, the Head of Civil Service of the Federation, Mrs Oyo Ita, informed the minister that the purpose of their visit is as a result of some lapses observed in some ministries as a result of their service wide meetings, hence the need for the visit. Based on that, the team decided to engage on peer review visit to see how each ministry is handling their mandate to know where there are possible suggestions or correction.

Earlier, the Permanent Secretary of the minister, Mrs Naratu Batagarawa, in her address which was followed by power point presentation, thanked the Head of Service and her team for being rightly inspired to keep the Civil Service on course stressing that that their efforts so far has underscored their determination to root out docility and complacency in the service and enthrone an epic Civil Service by providing an effective service delivery.

She highlighted some of the projects so far executed by the Ministry in her power point presentation which includes: barracks rehabilitation in six zones of the Federation, rehabilitation zonal educational inspectorate office in Abuja and Lagos, completion of Armed Forces PTI school, Games village in Esa Oke, rehabilitation of National war Museum, Umuahia, and of course, the intervention programmes from the time to vulnerable communities especially the areas affected by Boko Haram sect.

On human capacity building, a total number of 1000 staff were trained for the last 3 years.

Furthermore, Batagarawa also informed the team of the challenges facing the ministry in the discharge of their responsibilities which includes: late release of funds, inadequacy of the overhead cost to maintain the essential services of the ministry, and further urged them for proper funding.

After the vote of thanks, the Director Human Resource Mrs Huda Metteden thanked the Head of Service and her team on behalf of the ministry for their visit and later conducted them round the ship house complex to inspect some facilities.